The federal Age Discrimination in Employment Act (ADEA) was signed into law over half a century ago, and yet, according to a 2018 AARP survey of adults over the age of 45, 61% of respondents indicated that they had either seen or experienced age discrimination in the workplace. This number is troubling in light of the fact the percentage of workers over the age of 55 continues to increase. Many times, this trend that has been associated with a variety of factors, including medical breakthroughs, longer life expectancy, changes to Social Security benefits and employee retirement plans, and the recession of the late 2000s. 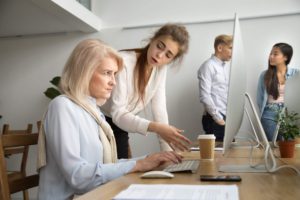 By 2024, it is projected that the median age of U.S. workers will be 42.2 years old. This projection is significant because the ADEA, as well as state anti-discrimination laws, protect applicants and employees 40 years of age and older from discrimination on the basis of age in hiring, promotion, discharge, compensation, terms and conditions, or privileges of employment. The ADEA applies to employers with more than 20 or more employees who worked for the company for at least twenty calendar weeks (in this year or last). State anti-discrimination laws tend to apply to even smaller employers. Violation of the ADEA can be incredibly costly, resulting in damages for lost wages and benefits, liquidated damages, and attorneys’ fees and costs. Some state anti-discrimination laws also provide for recovery of damages for punitive damages and emotional distress.

Discrimination on the basis of age can manifest in a number of different ways, most obviously hiring or promoting only younger employees without regard to actual qualifications, or replacing older employees with younger employees. However, treating employees differently with regard to job assignments and tasks on the basis of age as opposed to actual ability to perform those assignments/tasks may also constitute workplace age discrimination. For example, if an employer has two similarly situated office employees, and the employer only assigns social media-related tasks to the younger employee based on the assumption that the older employee will be less likely to be familiar with social media, that action may be the basis for an age discrimination complaint.

Age-related comments or conduct also constitute prohibited age discrimination in the workplace, and may include “coded” age discrimination. For example, an employer may open itself up to liability by using phrases like “You cannot teach an old dog new tricks”, referring to employees as “old school” or “set in their ways”, or repeatedly asking an employee when they are going to retire or encouraging the employee to retire absent the employee expressing a desire to discuss such an option. These types of practices fall into the category of “disparate treatment” on the basis of age – in other words, employees are treated differently than other similarly situated employees due to age.

Although the prohibition on disparate treatment on the basis of age may seem well-established, it remains a frequently litigated issue. Just last year, the chain restaurant Texas Roadhouse entered into a $12 million settlement with the Equal Employment Opportunity Commission (EEOC). This federal agency is tasked with administration and enforcement of anti-discrimination laws, and sought to resolve claims that the restaurant chain’s “standard operating procedure” was to reject older applicants for customer-facing, “front-of-house” jobs. In its lawsuit, the EEOC alleged that the chain had emphasized hiring “young, fun, cute, and bubbly people” to promote the company’s culture and image.

Trickier still, the ADEA may also prohibit employment practices that are neutral on their face, but that have a disparate impact on older workers (as opposed to allegations of disparate treatment, as set forth above). The most common contexts for allegations of disparate impact on the basis of age are layoffs and restructurings, for the reason that the highest paid employees (and thus, the employees whose layoff would make the most impact financially) also tend to be the oldest employees.

An employer may defeat an allegation of disparate impact discrimination by proving that the practice is based on a reasonable factor other than age (ROFA).

The following factors will be taken into consideration when determining reasonableness of workplace age discrimination allegations:

For purposes of illustration, consider a moving company that wants to reduce costs by terminating its highest paid and least productive employees. This practice may have a disparate impact on older workers; however, if the company can show that it used objective criteria to evaluate productivity (number of jobs completed in a certain number of time, number of damaged items attributable to an employee, number of traffic infractions incurred, etc.), the company will likely be able to establish a strong ROFA defense. On the other hand, if the moving company simply lays off its highest paid employees (who all happen to be older, due to time of service), an ROFA defense may be less successful.

The American labor force continues to age, and the group of 55-years-and-older employees are anticipated to make up nearly 25 percent in 2024. With this in mind, it is worth it for employers to engage with supervisors to ensure that they are properly trained regarding age discrimination, and to review and evaluate employment practices with the assistance of legal counsel to avoid allegations of disparate impact.

Angela Serranzana, Esq. is an attorney that has been representing clients in judicial and administrative proceedings in the areas of employment and labor law since 2005. She has broad experience working with unions, and individual employers and employees, and has appeared before the California Office of Administrative Hearings, the National Labor Relations Board, the California Labor Commissioner, as well as in proceedings at the trial and appellate levels in state and federal court, and in dispute resolution proceedings before the Equal Employment Opportunity Commission and the California Department of Fair Employment and Housing.

For additional information, please contact us via email at corporate@compliancetraininggroup.com.