To most employers, conflict between employees is a daily issue. Whether its co-workers arguing over gossip, managers dealing with the same employee repeatedly, or the overall workplace culture, Compliance Training Group’s conflict resolution training for employees can help resolve and prevent most workplace conflicts.  Conflict management training enables employees and supervisors to actively resolve workplace conflict issues.

What is Conflict Resolution?

Conflict resolution is a way for two or more parties to find a resolution to a disagreement. The disagreement may be personal or work-related. When conflict occurs, the best course of action is facing the issue directly and working to resolve the disagreement.

How does Conflict Resolution Affect Employers? 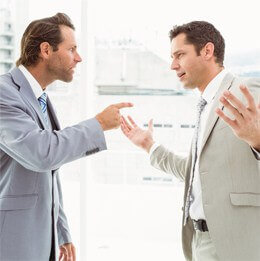 Conflicts arise constantly in the workplace, and the inability to come to a resolution can often times lead to violence in the workplace with devastating results. In recent years our society has become hyper-vigilant with respect to national origin, creed, gender, and religious affiliation. Whether you feel PC culture is a good thing or a bad thing, remember that employees have their own cultural preferences and may come into conflict with their co-workers as a result. The workplace is not immune to the conflicts that arise from diversity. When left unchecked, these conflicts can escalate into violence.

On September 27, 2012, a workplace shooting occurred at Accent Signage Systems, a Minneapolis, Minnesota business. The shooter, Andrew Engeldinger was being laid off when he pulled a handgun and shot the Operations Director, Top Manager, Owner, two employees, and a UPS delivery driver before committing suicide. A total of seven people died and two more were critically injured. It was the deadliest workplace shooting in Minnesota history.

Consider the following: There are numerous laws in in the U.S. that protect specific classes of people. In some instances, these laws grant rights and privileges to these protected classes only. Employees who are within a protected may feel that they are not given enough opportunities or that the laws are not being followed. Employees who are not within a protected class may feel that they are not treated equally.

What is Conflict Resolution Training?

Proactive communication is the key to resolving and preventing conflict. In a diverse work force, the ability to resolve conflict in a timely and effective manner can prevent escalation and increase productivity. Compliance Training Group’s Workplace Conflict Resolution Training aids employees in identifying the most common causes of conflict at your organization, provides techniques for managing workplace conflict, and identifies the negative effects of unresolved conflict so employees understand the importance of immediately resolving their problems with co-workers and management.