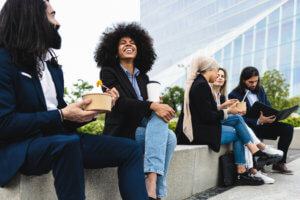 We are all equal before the law. That’s the idea. Yet how do we navigate workplaces, and other social environments when the norms for one group might have little relevance to another? Even worse is when those norms are used as a subtle form of bias and discrimination. Enter the CROWN Act: a new law designed to stop unlawful discrimination against different hair textures and styles.

While most Americans understand the implicit “norms” around hairstyles, it’s long been a bone of contention for many Black Americans in the workplace. Because of the differences in hair texture, Black hair can be subjected to unjust policing in offices and workspaces. Workplace grooming policies and dress code can dictate against locks, braids, twists, afros, Bantu knots, and natural Black hair – despite a rich cultural history of such hairstyles from different cultures around the world.

What is the CROWN Act?

The CROWN Act, “Create a Respectful and Open Workplace for Natural Hair”, aims to eliminate the subtle and explicit forms of bias against traditional Black and African American hairstyles.

Such discrimination can take the form of unfair rules and policies – where subjective and biased beliefs about “professionalism” or “neat” hairstyles lead to the penalization of people opting for more natural and traditional hairstyles. The “norm” is often based on societal standards of beauty, e.g., straight hair. But, as the bill’s proponents argued, this is strongly biased against other hair textures. This has forced many Black employees to feel that they need to straighten, minimize, or hide their natural hair.

What does the CROWN Act include?

In a society in which hair has historically been one of many determining factors of a person’s race and whether they were a second-class citizen, hair today remains a proxy for race.

It’s now thought that the bill will go further. It’s already passed the US House and needs to be approved by the US Senate before arriving on President Joe Biden’s desk for the final signature to be applied in all US states and territories.

Despite Title VII of the Civil Rights Act of 1964 explicitly prohibiting discrimination based on race, hairstyles such as braids, locks, and twists are often subject to biased rules.

According to a 2021 study by Dove CROWN Research: Black women were 1.5 times more likely to have been sent home or know of a Black woman sent home from the workplace because of their hair.

Sadly, such discrimination and microaggressions have had a damaging influence on young Black Americans and their place in the workforce.

For all men and women struggling with hair discrimination: this law is welcome. In some ways, the CROWN Act is a law that should never have been. With legislation such as the Civil Rights Act of 1964 and the Fair Employment and Housing Act already preventing racial discrimination in the workplace, such discriminatory practices should never have been allowed. Reinforcing these legal protections by regularly training the workforce on anti-discrimination and harassment laws can also aid as a preventive measure.

Hopefully, with the new act passing through the Federal government, and state and local laws like CA sb188, natural hair discrimination will be history.